Gahan talks about so-called “attacks”, these are moments when she is out of breath, numbing her arms and legs, rising heart rate and unable to perform even the simplest activities, including showering. “We couldn’t even talk in May and June, so I was sick,” she described the disease. Gahan became infected in early April, was healthy and in shape, and went jogging and yoga three times a week.

Psychologist: I can’t even think about running

“I can barely walk to the corner now, I can’t even think of running,” added the psychologist. It is one of hundreds of thousands that coronavirus has noted and now has chronic problems. “I am a clinical psychologist and I do not experience anxiety attacks, these are clearly the consequences of coronavirus. Doctors say they don’t know what to do with it. “ Gahan said.

Experts from Bristol Hospital warned that many people who have contracted covidem-19 have a presumption that the disease will have a long course or that it will affect them in the long term. They referred to cases of 110 infected in their hospital, which had to be hospitalized. After 12 weeks, they were released, and 74 percent reported shortness of breath and extreme fatigue.

The British Medical Journal (BMJ) was published in August instructions on how to treat patients with long-term symptoms of covid-19, treatment in this case is based on blood tests, specifically to examine the level of oxygen in the blood.

Neurological dysfunction can cause long-term consequences

“Some patients develop chronic problems or long-lasting symptoms, we’ve also seen SARS and MERS.” explained Michigan pneumologist MeiLan King Han. “The patients I worked with continued to complain of coughing, difficulty breathing, or severe fatigue, even after recovery, even months after recovery.” added the expert.

The basis for determining the effective treatment of long-term covid-19 remains is to determine which symptoms can be attributed to heart and lung damage and which are the result of deeper neurological dysfunctions, believes American pneumological physiotherapy specialist Noah Greenspan.

The expert explained that dysautonomia is most common in people with long-lasting coronavirus symptoms. which is a disorder that causes poor communication between the central nervous system and the rest of the body.

The autonomic nervous system regulates functions such as breathing, sleep or digestion, if it does not work as it should, various symptoms may appear, Greenspan reminded. “It depends on the person,” the expert added.

Gahan and others suffer from postural orthostatic tachycardia syndrome (POTS), a disorder in which the heart rate increases when changing from a supine position to a standing position. This disorder can cause nausea, dizziness or fainting.

“Disgusting symptoms that control your life”

“The frequency will increase by 50 to 75 beats,” Greenspan pointed out. Gahan believes she has recovered from coronavirus more or less well. “I think my lungs have healed completely,” said the psychologist. She wants her doctors to be able to find out what causes her attacks of weakness, and she realizes that it may be a neurological disorder.

“The answer to this question may be dysautonomia. When it comes to me, all I can do is go to bed. I can’t stand any interaction, I’m bothered by light, sound and other sensations. It’s not about fatigue or migraines, it’s about disgusting symptoms that have dominated your whole life for a long time, “said Gahan, who hopes her story will make people take the current restrictions more seriously than before. 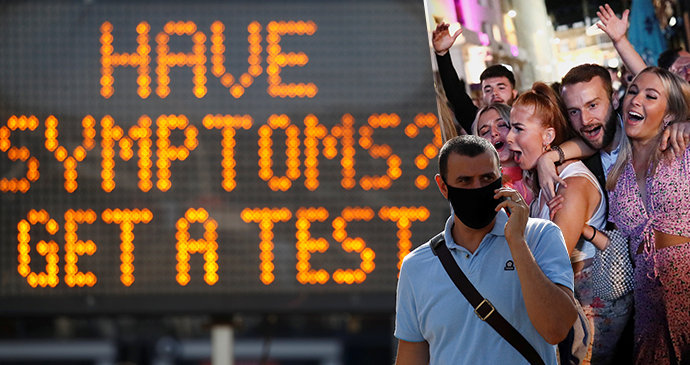 COVID-19 and the school year. The Ministry of Education explained...

Putin’s spokesman Dmitry Peshkov is positive about the irony

Coronavirus April 5 in Ukraine and the world

Russians are preparing to save on food, banks will incur losses,...

Coronavirus in Russia – the number of infected COVID-19 in Russia...

A Latvian citizen is being treated at Covid-19 Vietnamese Hospital –...