Over the course of several weeks, federal and regional data on the number of deaths due to coronavirus varied significantly. From May 5 to May 21, the Russian operation headquarters made no changes to the column with the dead in the Kaliningrad region. Moreover, in the region the data was updated on May 12, 14, 16 and 18.

After a long break, the figures coincided only on May 26: three more deaths appeared in federal statistics, which the local headquarters announced the day before. However, on May 28, differences again arose: the official resource stopkoronavirus.rf did not reflect data on the two dead. Thus, the regional headquarters reports 23 deaths from COVID-2019, the federal one – about 21. 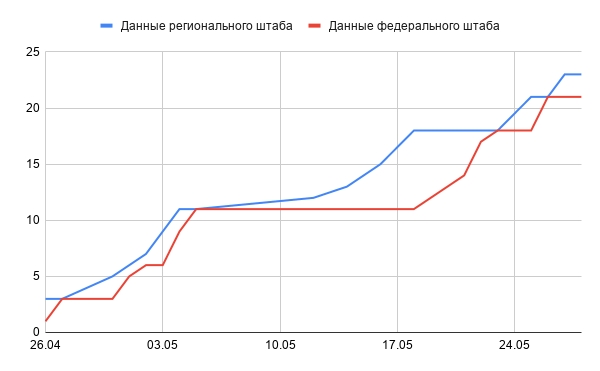 The discrepancy in numbers, the head of the department of Rospotrebnadzor Elena Babura explained the technical malfunction. However, even now, deaths from COVID-19 do not always immediately fall into statistics. According to a Kaliningrad.Ru correspondent at the regional headquarters for the fight against coronavirus infection, the delay is associated with a special autopsy protocol.

Largely because of this, there is a certain delay in statistics. In federal statistics get only with the results of pathological studies, which confirms the cause of death. In this case, the autopsy of people with COVID-19 is carried out on certain days, because after this special treatment of the pathological rooms is required. Therefore, some deaths fall into statistics literally the next day, and some with a delay, the headquarters noted.

There is no clear schedule for an autopsy. The regularity of studies depends on the number of deaths. Special protocol was developed by specialists of Rospotrebnadzor. The regional administration departments refused to clarify the details, explaining this with the official purpose of the document. However, the general recommendations of the Ministry of Health are in the public domain.

The manual says that the autopsy and analysis of samples should be carried out “as early as possible.” The premises for pathological research are subject to special requirements for air filtration, atmospheric pressure, people’s access, disinfection, and so on.

In the Kaliningrad region, not all people falling into statistics die from COVID-19. “Of the eleven people we lost, six died in their pure form from the manifestation of coronavirus infection. For the rest, it was the background and was not the main cause of death. But since it is considered for accounting that if COVID was confirmed, then the case is equated with death from a coronavirus infection, – said Minister of Health of the region Alexander Kravchenko on May 4.

On Wednesday, May 27, the Ministry of Health of the Russian Federation officially recommended using this approach in all regions. The regional operational headquarters emphasized that the local authorities immediately applied the approved calculation method.

Information about how many people died in the Kaliningrad region from concomitant diseases with a confirmed diagnosis of COVID-19 was promised at headquarters later.

As of May 28, 1376 cases of infection were detected in the Kaliningrad region. Since the beginning of the pandemic, 23 patients have died in the region, 588 were discharged from the hospital after treatment. A total of 47 545 people were examined in the region, 3 916 local residents remain under medical supervision, including 173 under the conditions of an observer.

According to the total number of cases, the Kaliningrad region is in 56th place in the Russian Federation. Moreover, in terms of mortality, the region is in eighth position with an indicator of 1.53%.

Warning from experts about the mysterious data site Worldometer, which stands...

Crowded passenger plane during a coronavirus pandemic horrified the network –...

After the coronavirus, another epidemic is lurking in Cluj. More...