The world community is fighting the second wave of the spread of the SARS-CoV-2 coronavirus. Since the beginning of the pandemic, more than 40 million inhabitants of the planet have been infected. According to the Worldometer portal, more than 1.1 million people have died from the consequences of the COVID-19 disease caused by the virus, and over 30 million patients have recovered. DW follows the events of Monday, October 19 (Moscow time).

Authorities Slovakia intend to test all citizens over 10 years of age for coronavirus. This will involve up to 8,000 military personnel and 50,000 government officials, including police and firefighters, Defense Minister Jaroslav Nagy said. The unprecedented project from October 23 to 25 will be tested in the foci of new outbreaks, and then expanded.

The Prime Minister of the Republic Igor Matovich highlighted the importance of reaching as many people as possible. The alternative would be a national lockdown, he explained. The SARS-CoV-2 virus in Slovakia was detected in 29 835 people, 88 patients died, 7359 recovered.

Coronavirus confirmed by Minister of Health South Africa (South Africa) Zvelini Mkize and his wife. The minister went into self-isolation and urged fellow citizens not to forget about basic precautions. South Africa accounts for the most cases of infection (702,131) and deaths (18,408) on the continent, according to official data.

Twitter has removed a post from an advisor to the White House Coronavirus Task Force for violating the microblogging network’s rules on disseminating misleading information. Neuroradiologist Scott Atlas, who was included in the working group by US President Donald Trump, in his tweet spoke out against wearing masks.

Globally, the United States accounts for the most infections (over 8 million) and deaths among coronavirus patients (over 224,000).

In Prague, over 2000 football fans and hockey fans took part in protests against COVID-restrictions In sports. An hour-long demonstration in the city center resulted in clashes with law enforcement officers, more than a dozen people were detained.

From 12 October in Czech Republic it is prohibited to hold any sporting events for two weeks, except for international competitions Prime Minister Andriy Babish urged residents to stay at home whenever possible. The causative agent of the disease COVID-19 in the country was found in 171 487 people, 1402 patients died, 69 090 recovered. 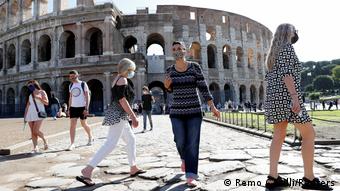 Tourists near the Colosseum in Rome

Italy tightens measures to combat the spread of infection. Mayors of cities will have the right to close access to squares and other public spaces after 21.00 to avoid crowds, said the chairman of the Council of Ministers Giuseppe Conte. In addition, the halls of slot machines and bookmakers will be able to receive visitors only until 21.00.

The virus in Italy was detected in 414.2 thousand people, 36.5 thousand infected died, over 251 thousand recovered. As of the morning of October 18, the country recorded the highest daily increase since the start of statistics in 11 705 new infections.

Map of the distribution of coronavirus in the world, compiled by Johns Hopkins University

Most New Yorkers see a future for themselves in NYC

In the Czech Republic, almost 12 thousand new patients with COVID-19 per day

Gloves are overkill and ineffective against COVID-19

Healthy people will be infected with the corona virus

Pandemic: revealed the second way of penetration of coronavirus into cells, which makes it more aggressive than its predecessors – news on UNN

Coronavirus: ‘Long COVID’ Warning As Research Shows One In Twenty Has Virus Symptoms For Eight Weeks Or More | UK News

Wash your hands instead of using gloves to avoid Covid-19.

COVID-19 in Ukraine: the Armed Forces recorded another death due to...

At the end of October, the processing speed of analyzes for...

Due to its rapid spread, Covid-19 cancels the legendary Paris-Rube bike...

Stepanov named regions with a tense situation of hospital occupancy due...